THE Women Artists Slide Library begins 1988 with another battle for survival. Its funding application to continue the development of its Journal has been rejected by The Arts Council.

Although W.A.S.L. has continued to survive and develop over the years, it has been a hard, up-hill struggle, demanding long hours of work from its paid staff and continuous dedication from its many volunteers. Sometimes it has seemed like an endurance course in the arts rather than trying to do a professional job. Nevertheless much has been achieved, by women for women in the arts. The development of the Journal has been an important part of this struggle. A pioneering publication giving space and a voice to women artists as well as providing listings, information, reviews of exhibitions and books and reporting on conferences both nationally and internationally. W.A.S.L. is a small organisation with limited funds, yet it has received a constant flow of subscriptions from institutions, colleges and individuals. It has attracted more and more advertising into its pages and each issue has been more widely distributed than the previous one. We have been pleased with the progress we have made in such a short period of time. Nevertheless the Arts Council committee did not feel that the Journal justified funding. The committee of nine, six of whom are women, including prominent artists, have made a decision to make three women redundant through the loss of their part-time work (bearing in mind that there was never funding for a full-time post on the Journal) and that without core funding W.A.S.L. cannot cover the basic production costs.

We are pleased to record that the funding application by Feminist Art News (FAN) has been successful. But the terms of our refusal letter indicate that a choice was made between us. We maintain that there is space for more than one women’s art magazine, and that to fund only one reduces women to a minority category and perpetuates discrimination against women in the arts.

The Arts Council is interested in funding magazines by minorities. The fact that they place women in this category is evident in the terms of our refusal letter. As will emerge from the committee’s comments discussed below, they made a distinction between the aims and content of the Journal and those of FAN. It is a process of definition and distinctions which would be highly unacceptable (in fact impossible to envisage) if the two magazines in question had been general (i.e. male) art magazines like Art Monthly or Artscribe.

The fact that a lavish and well-established magazine (supported by its own publisher) like Artscribe has had its long history of funding even further prolonged suggests that the priorities of the Arts Council in apportioning public money is on the most fundamental level open to serious criticism. We have been assured that Artscribe’s grant for next year is greatly reduced. This fact leads to the core of our argument. Our application was simply refused: we were not offered a reduced grant or an opportunity to argue our case. This is because a choice was made by the Arts Council between FAN and the W.A.S.L. Journal. Two minority products were weighed against each other, and one was chosen.

To focus on the two specific reasons given in the Arts Council’s letter refusing our funding application, they are (1) that some exhibition reviews were out of date, and (2) that greater editorial control was needed because some of the writing was not of a high enough quality. We will consider these points in turn.

With regard to the late coverage of exhibitions, it was obvious that the Journal had been given a convenient definition to separate its aims and contents from those of FAN, which is accorded a thematic and in-depth approach. The committee describes the Journal as ‘a newsletter/source of information’. The informative role of the Journal is an important aspect of our work, but equally important is the Journal’s educational role in strengthening links between the women’s arena and the mainstream. In view of their narrow definition, the committee’s expectations of the Journal as an up-to-date newsy paper are bound to be disappointed–especially when you consider that it is produced on a bi-monthly basis and covers exhibitions by women, which are often of short timespan. The committee accepted that the Journal was largely successful in being up-to-date and that only a small number of reviews lagged behind the date on our cover. But our reason for including older reviews was not accepted, namely that the questions raised by women’s exhibitions have an ongoing relevance to debates within the women’s art movement. 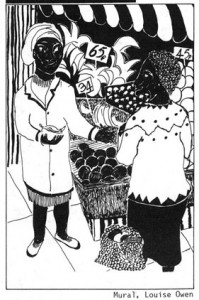 The Arts Council’s stance on this issue of late coverage of exhibitions reveals a flagrant example of double standards. To take one example, the January/February issue of Artscribe devotes considerable space to the Edinburgh Festival, which is described as ‘this year’s’ but in fact took place in Summer 1987. Artscribe puts no dates on its smaller exhibition reviews either, so it is less easy to see which of them are out-of-date. The Journal’s aim to provide accurate documentation of women’s art by dating their exhibitions has put our very existence in danger.

The committee’s view of the Journal as ‘a newsletter/source of information’ and the artificial dichotomy it creates with the ‘thematic, in-depth’ aims of FAN is a serious misconception of our aims and our role within the Women Artists Slide Library. With its extensive documentation of women’s art, both historical and contemporary, the Library provides a unique source of historical research and original writing by women artists. It is obvious that the committee rejects the dual informative and educational aim of the Journal as expounded in the policy document that accompanied our funding application. We refuse to accept the definition of the Journal that the Arts Council imposes on us in order to justify its own contradictory set of priorities.

The second reason the committee gave for rejecting the Journal’s funding application was the uneven quality of the writing. The suggestion that paying contributors would be a solution to this ‘problem’ reveals the committee’s aloofness from the issues in question when you consider that last year’s grant did not even cover production costs. Furthermore, it might be expected that the whole issue of quality should be approached in a more imaginative way by a Council whose very reason for existence is to encourage new ventures. Women artists are only recently receiving serious attention in numbers. Women are confronting an interested public sometimes for the first time. Within such a context, the pioneering character of the Journal cannot be overstressed. In these early stages, all sorts of writing will emerge, and it is our policy as a feminist organisation not to stifle the less assured types of writing at birth. To quote from our policy document: ‘The Journal aims to represent the whole spectrum of women’s art and give a voice to all types of women, not simply the more intellectual or academic ones. Only in this way can develop commentary and criticism from a woman’s perspective’. At a time when postmodern pluralism is so fashionable, it is ironic to see how firmly the same people strive to keep control of the discourses.

The issues that we touch upon here deserve much broader discussion. Yet they are unlikely to receive any attention because what we believe is an indispensable publication on women artists has been ditched after only 10 months of production, and with total disregard for the degree of investment by subscribers. Our long-term aim is to be independent but, as the example of Artscribe illustrates, this cannot be achieved overnight. Our first five issues have attracted a scale of interest from universities, libraries and individual subscribers that makes our sales figures compare very favourable with those published by the Arts Council on the magazines they fund. In terms of content, we survey work by women of many different cultures, we have an independent critical approach, a voluble readership, and are rousing controversy over artists of stature.

More importantly, we have been carrying news and information about women artists, their lives, their work, their voices and their opinions. W.A.S.L. has written and encouraged writing about the actual situation of women artists today including the problems with tokenism, criticism (or lack of it!) and employment within art colleges, and has published statistics which reveal the level of invisibility for women artists in national exhibitions and as official art representatives abroad. Perhaps the refusal to fund W.A.S.L.’s Journal is not just about the Arts Council’s lack of money, but is more a question of how the money is distributed, by whom, for whom, and under what criteria?