During 1987, two incidents were reported to W.A.S.L. concerning vandalism and censorship. Outlining the circumstances of these incidents opens up old debates around art in public places, both in a gallery situation and outside of it.

Last year two sculptresses, Diane Maclean and Barbara Lander worked together to produce an exhibition called ‘Two Hands Make Sculpture’. It was scheduled to open at the Civic Square in St Albans. This was the first time that the site was to be used by artists to display their work and the artists themselves funded the work, prepared the site, constructed their pieces thoroughly so that they could withstand the general amount of attention that art in public places receives. Diane Maclean’s large wooden constructions, one of them over seven feet tall, nine feet long, were jointed and fixed with metal dowels. Barbara Lander’s structures were welded and bolted together. 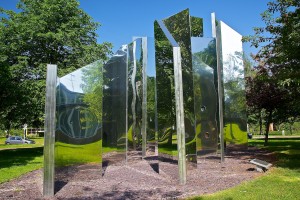 All of the work had been firmly fixed through the paving slabs into the ground. Both artists by working on site had aroused a certain amount of public response. On the whole, people seemed interested and supportive and although the artists expected some opposition, they were quite unprepared for what did take place. Within 24 hours of a very successful opening, their work had been forcibly knocked over, Diane Maclean’s giant wooden sculpture was broken and in pieces on the ground; large chunks of wood had to be retrieved from the local pond. It was obvious from the tyre marks all over her work that a car had been used to push it over. This was very determined attempt at vandalism.

Although both artists were aware of the risk they were taking by presenting their work in an open public place, they were shocked by the efforts of the vandals.

After the initial shock of seeing their work in pieces, the artists reinstated it, determined not to be beaten. They decided to take it in turns to invigilate the site, especially on Friday and Saturday nights. They felt that they at least could prevent further damage from happening. So they sat in their cars every Friday and Saturday night throughout the exhibition. A number of times they had to confront drunken members of the public and groups of men, late at night, to prevent them from damaging their sculpture. The work represented over a year’s effort for both artists, and both the making and showing of these particular pieces (plus the repairs) were funded by them as well. Both artists survived their ordeal although their nightly vigilance resulted in almost complete exhaustion for them both. They received no financial compensation from the Council for either the damage to their work or the repairs they subsequently had to carry out.

This is not an isolated incident as The Women Artists Slide Library often receives information about similar incidents. Most recently is the vandalised work of Almuth Hargreaves, situated on the green area outside the church on Hammersmith Broadway. Her work, in situ (as well as another piece by Rosie Leventon), is part of the Riverside Open. Almuth’s work is in cast concrete and within the first few days of siting the work it was smashed and the pieces scattered. She has subsequently cast new pieces and reinstated them. When discussing this problem with her she expressed a deep concern for art in public places. She worries that perhaps the only art which could withstand such treatment would be monolithic pieces. That small, more personal, pieces of sculpture just simply couldn’t survive. She also had a fierce determination that she would not allow the vandals to censor her work and she would repair damaged work and recast new pieces so that her statement could be continued.

Another reported incident which has come to our attention is one not of vandalism as such, but censorship. This took place at Brentwood in the Local Art and Community Centre, over the work of Deborah Stevens.

In August 1987, the Brentwood Art Club mounted a Summer Exhibition of their work at the Old House. This consisted of three pieces of work from each member. A painting by Deborah Stevens was removed without her knowledge or consent unofficially by a local Councillor. After some objection the work was reinstated, only to be officially removed on the last day of the show by Brentwood Council’s Leisure and Recreation Department.

The person responsible for the painting’s removal was Councillor Smith, who was quoted as saying ‘I felt it was a grotesque painting not in keeping with the standards we want to maintain at Old House’. Councillor Smith removed the painting stating that there had been two complaints by members of the public and so, in his opinion, he felt justified in removing it from the exhibition. The artist was not called or informed of this situation and was given no opportunity to either speak to the Councillor involved or deal directly with the complaints. Deborah Stevens was puzzled as to the description of her painting as ‘grotesque’. How was the painting grotesque? Is it the content of the work? The style of the painting? Or the nature in which the female forms have been painted? She never had the opportunity to pose these questions to either the Councillor, the committee or the so-called public complainants. In a local newspaper Cllr Bob Smith was quoted, ‘I don’t object to nudity when it is tasteful and beautiful. Censorship is one of the words that was brought up at the meeting. They don’t know what they are talking about, they are not old enough to remember censorship, we are just trying to keep up standards’.

Since this incident there has been a move to set up a committee to monitor what works of art should hang at the Old House in Shenfield Road. Does this mean that art will be censored/selected in Brentwood’s Art Centre in the future? And by whom?

In this case Brentwood Art Society supported their member and her work, insisting to the Council that the work had been selected on its artistic merit and that they, as a well-recognised local art group, had the necessary artistic integrity to select work for public viewing.

Nevertheless the objecting Councillor did attempt to rush through a new committee which would view future exhibitions scheduled to use the Old House. The aim of such a committee would be to judge if work was suitable or not. The proposed committee was made up of Councillor Smith and a number of people who were mainly sport orientated. Fortunately the proposal was turned down, and by law cannot be brought up at another meeting for six months.

But with Councils becoming increasingly involved in the support of artists and their work, this whole incident highlights a number of problems. Any committee formed to look at art work or to make a selection for public viewing has to have an artistic authority to do this and should be made up of people who have both experience of art and knowledge of this area of professional activity. No one person should be able to exercise such prejudice against a piece of art already selected for public viewing, even if they are a Councillor.

Councils have to form proper structures within their organisations to deal with art exhibitions, art in public places and general art activities. These members of staff have to be art trained and be able to deal professionally with the work and administration of art.

All art shown under a Council’s auspices, whether funded by them or just simply sanctioned should be insured so that there is some sort of way in which to help artists repair their work if damage does occur. Let’s hope that more Councils become professionally involved with art and artists this year on all levels of support for artistic production within their boroughs. The artists mentioned in this article would like to hear from other people who have had similar experiences: please write directly to them care of W.A.S.L.